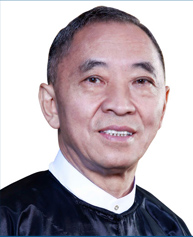 Mr Aik Htun is founder of Shwe Taung and Chairman of its Board of Directors.

He is the driving force behind Shwe Taung’s exponential growth from a modest trading house in 1970 to one of Myanmar’s largest corporations today. His leadership has been pivotal in building Shwe Taung into a diversified conglomerate with key businesses in building materials, distribution, engineering & construction, infrastructure investments, lifestyle, and real estate.

Aik Htun has always played a proactive role in Myanmar’s nation building. This is reflected in Shwe Taung’s focus on delivering solutions aimed at sustaining progress for the country. Shwe Taung has participated in key development projects such as highway, road and bridge construction, power grid construction, and landmark real estate projects.

Shwe Taung’s commitment to corporate social responsibility is driven by Aik Htun’s belief in being a catalyst for positive change. Under his leadership, Shwe Taung participated in the United Nations Global Compact since 2013, committing itself to adopting sustainable and socially responsible policies in the areas of human rights, labour, the environment and anti-corruption. On the corporate philanthropy front, Shwe Taung has donated close to US$25 million to charitable causes, including the construction and donation of 98 schools and three hospitals.